The work incorporates individual cartoon-like speech balloons that, like leaves, ornament the six jagged branches. Each bubble, rendered in white-painted steel with heavy black outlines, features a solitary word or punctuation mark. One will see, in no certain order, truth, !, you, I, is, love, the, ?.

Upon closer inspection, viewers may see the exclamatory phrase “the truth is I love you!?” or, instead, inquiries such as “the truth is?” or “is love the truth?” The meaning of the sculpture ultimately resides with the viewer.

Installed in the Woldenberg Art Center’s Newcomb Pottery Garden, the steel sculpture encourages a sensitivity to diversity and, in the artist’s words, “how we, as a community, can accept that, even though other people’s truths are different from ours, they are still valuable.”

TRUTH BUBBLE SIGN TREE adds to conversations taking place on campus about identity, race, and politics,” noted museum director Monica Ramirez-Montagut. “It also informs discussions of power—how some truths are given more credence than others.” Notably, “power” is the 2016-17 theme of Forum Tulane, a university-wide initiative fostering interdisciplinary collaboration and intellectual exploration.

Ramirez-Montagut selected Thomas’ work during a summer visit to New York where it had previously been installed at Brooklyn’s MetroTech Commons by the non-profit Public Art Fund. It replaces COMPANION (PASSING THROUGH), a sixteen-foot-tall Mickey-Mouse inspired sculpture by pop artist KAWS that welcomed visitors to the Tulane museum for nearly a year.

About the Artist
Hank Willis Thomas received a BFA in Photography and Africana studies from New York University and his MFA/MA in Photography and Visual Criticism from the California College of Arts. He has exhibited extensively including at the International Center of Photography, Studio Museum in Harlem, and the Baltimore Museum of Art. Thomas’ work is in numerous public collections such as The Museum of Modern Art, The Solomon R. Guggenheim Museum, The Whitney Museum of American Art, and the National Gallery of Art in Washington DC. Recent notable exhibitions include Hank Willis Thomas at the Cleveland Museum of Art and Repetition and Difference at the Jewish Museum in New York. 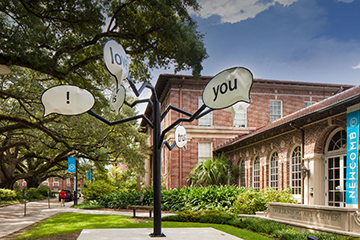 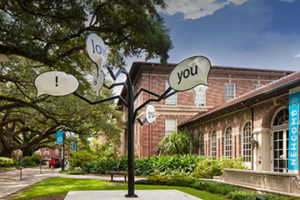 Mickalene Thomas: Waiting on a Prime-Time Star
Scroll to top