Behind the Scenes with Laura Anderson Barbata and Shaka Zulu

“Louisiana Reimagines: High Culture Below Sea Level” is an exchange between Laura Anderson Barbata and local tradition bearers from the Black Masking Indian tradition that responds to the garments and stilt dancing projects presented in the Newcomb Art Museum’s 2021 exhibition “Transcommunality”. Offering a look into the cultural world of Big Chief Shaka Zulu of the Golden Feather Hunters, this program is centered on Shaka Zulu’s distinct yet ever-evolving New Orleans practice which combines procession, drumming, elaborate 3d suits, and West African stilt dancing.

In March and April 2021 during the Covid-19 pandemic, the two artists conducted a series of conversations via Zoom. Together they explored many topics related to creativity and stilt-dancing, such as the ancestral origins of Shaka’s practices and the healing power of the arts. They also discussed Shaka’s role as a youth mentor, the production of his suits and some of the spiritual philosophies guiding his work. Highlights of this cross-cultural dialog are presented as a series of video clips and offer an informal behind-the-scenes impression of the artists’ online exchange.

A work for camera by Shaka Zulu shot in Tremé and directed by Abdul Aziz will premiere at the museum June 26 and features local performers on stilts and percussion who represent four generations of Zulu’s family. Later in July, a virtual roundtable conversation led by Dr. Joyce Marie Jackson will also consider the processional art form’s power to foster diverse, intergenerational community relationships and Super Sunday’s historical connections to protests for social justice.

Using the “Transcommunality” exhibit and Shaka Zulu’s work for camera as touchstones, the roundtable in July gathers voices from the stilt dancing community – Najja Codrington of the Brooklyn Jumbies and Sarauniya Zulu of Zulu Connection – as well as three legendary figures of masking culture in New Orleans: Big Queen Rita Dollis of the Wild Magnolias; Big Chief Derrick Hulin of the Golden Blades; and Big Chief Darryl Montana of the Yellow Pocahontas Hunters.

Explore these behind the scenes exchanges below!

Based in downtown New Orleans, Big Chief Shaka Zulu is the multi-talented leader of the Golden Feather Hunters, a tribe of Black masking Indians whose spiritual traditions of song and pageantry are known globally. Chief Shaka is a culture bearer involved with many aspects of Louisiana’s street culture and performance scene – including African and Haitian music, to which he was introduced as a child by his father, Zohar Israel. A versatile and frequent collaborator, Chief Shaka has worked with the Kumbuka African Drum & Dance Collective since the early 1980s; played drums with Big Chief Smiley Ricks and his band Indians of the Nation; and toured internationally with Donald Harrison Jr. as a percussionist and vocalist for his band Congo Nation. Chief Shaka is a master of the African djun-jun drum and also plays many other percussive instruments. 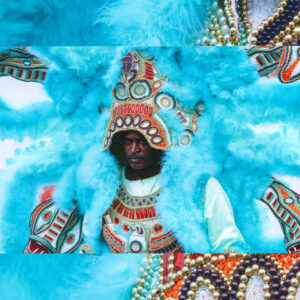 Chief Shaka began stilt dancing at a young age performing with the company Free Spirit of New Orleans. Since 1986 he has performed around the world as a featured solo stilt dancer as well as with his own performing arts company, Zulu Connection. He is known for spellbinding audiences with his colorful and elaborate costumes, tremendous heights, extraordinary acrobatics, and dance moves. His work as a stilt dancer has been presented at festivals and events in New Orleans as well as in China; Germany, the Netherlands, Jamaica, Bermuda, Trinidad and Tobago, South Africa, Tanzania, and Morocco, among other places.

Chief Shaka is initiated into the secret and sacred art form of stilt dancing and also educates youth in his community on the culture, discipline, and need for preservation of this guarded ancient custom. He is committed to the growth and educational prosperity of local youth; and also manages and teaches for the New Orleans chapter of Better Family Life, a youth summer cultural enrichment camp.

As a Black masking Indian, Chief Shaka has exhibited his suits nationally and internationally at museums and festivals – including the 2015 exhibit “New Orleans – The Sound of a City” in Berlin which was supported by the US Embassy; the 2017 exhibit “Carnival Around the World” at the Afrika Museum in Berg en Dal, The Netherlands; on Martha’s Vineyard in 2019; and for nearly two decades in Asheville, North Carolina, each year with the LEAF International festival, where he is also a youth educator and involved with LEAF’s programming in Tanzania and Haiti. Locally, Chief Shaka’s suits have been exhibited at The Presbytère, part of the Louisiana State Museum; at the New Orleans Academy of Fine Arts; and in his own Golden Feather Mardi Gras Indian Gallery which was previously located on Rampart Street.

Recently Chief Shaka and Naimah Zulu, his artistic partner to whom he is married, also produced the vibrant and historical stage production  “New Orleans Voices of Congo Square” at the OrpheumTheater which featured an array of magical music, colorful dance, and mysterious masking Indian culture. 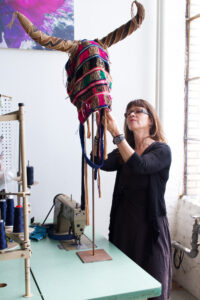 I am a bicultural, transdisciplinary artist. Since 1992 I have developed sustainable art-centered projects that integrate collaborative and participatory work that addresses issues of social justice and the environment. As a Mexican born, New York based artist, it is my belief that a shared artistic social practice can serve as a platform on which we connect, learn, exchange, create, and transcend borders in order to activate our sense of belonging to a global community. My work seeks to further the expectations of socially-engaged art by involving collaborators such as archives, scientists, activists, musicians, street dancers, and artisans to create works that operate both inside and outside of the art world. Since 2001 I began to work with stilt dancers in Trinidad and Tobago, and since 2007 have consistently collaborated with the Brooklyn Jumbies, and in 2012 with the Zancudos de Zaachila from Oaxaca, Mexico. The work combines character and narrative development with numerous collaborators in addition to textile arts, sculpture, dance, masking, music, procession, improvisation, ritual and protest.

Transcribed Copies of the Videos

2019 interview with Shaka Zulu at Xavier University of Louisiana; Produced and directed by Kim Vaz- Deville, Filmed and edited by Lexcie Thomas. https://digitalcommons.xula.edu/masked/7/