The Newcomb Art Museum holds the largest collection of Newcomb enterprise works in the public trust. Created here at the former Newcomb College, Newcomb pottery is considered one of the most significant American art potteries of the first half of the twentieth century. Influenced by the English Arts and Crafts movement, Newcomb pottery was exhibited around the world, sold in shops on both coasts, and written about in art journals throughout the United States and Europe. During its nearly fifty years of operation, Newcomb Pottery provided employment to roughly ninety Newcomb graduates, and produced some 70,000 distinct pieces of work.

In 1884 Tulane University hired William Woodward to start an art program at the school. That same year, the Cotton Exposition world’s fair was taking place across the street in Audubon Park. Inspired by exhibits at the fair, Woodward organized the Tulane Decorative Art League, teaching evening classes in pottery, carving, drawing, painting ,and needlework. From this league, the New Orleans Art Pottery Club was formed. In 1886, through the bequest of Josephine Louise Newcomb in memory of her daughter Sophie, Newcomb College opened as the very first coordinate college for women. William Woodward’s brother Ellsworth took over the art program at Newcomb. Inspired by the arts and crafts movement in England and the pottery factories of Europe, the Woodward brothers founded the Newcomb Pottery enterprise, which began production in 1894.

An Education in Craft

In 1895, a year after the Newcomb Pottery enterprise was founded, the Newcomb potters developed their style. All pieces were thrown and decorated by hand, with no two being alike. Each piece was required to function–as plates, bowls, cups or vases–but the primary purpose of the pottery was to be decorative. The vessels were made from local clays and their subject matter reflected the local landscape. At the time, because it was not considered ladylike to sit at a potter’s wheel, male potters employed at the Pottery threw the vessles, while the women were responsible for choosing the shapes and applying the decoration and glazes. Students in the Newcomb Art Department learned pottery and decoration skills as part of their schooling, and were hired by the Pottery only after they graduated from Newcomb College.

From 1895 to 1902 Newcomb Pottery pieces were primarily decorated with under-painted designs, finished with a clear glossy glaze. The designs of Newcomb pottery were more standardized after 1902. Incising was developed as a design technique, giving the pieces an expressive and graphic quality. As Newcomb pottery was becoming commercially popular and being sold across America, it was also being recognized for its craftsmanship. The Pottery won awards at several world expositions, including the bronze medal at the Exposition Universalle in Paris and three gold medals at the Jamestown Tercentennial in Virginia.

In 1910, Newcomb chemist Paul Cox invented a matte glaze that Newcomb Pottery quickly adapted into their designs. This glaze was soft and romantic and proved to be as prize winning as the previous design style. Developing the new style further, the Pottery began sculpting designs into the clay, rather than incising or underpainting the works. These sculpted works reflect a shift toward more representative imagery and a shift away from the more graphic designs of the previous decade. The matte glaze was popular, and its popularity made sales increase. The increase of sales, however, put pressure on the Pottery and the artists to produce more, and experiment less. As the Newcomb wares became more standardized, the Pottery won fewer awards, and fewer students were inclined to join.

End of an Era

Newcomb Pottery experimented with some ArtDeco styles from 1924-1929. Unfortunately, the designs were not well received. The Pottery survived the Great Depression, but by 1935 most of its original faculty and founders had retired or died. The new leadership at Newcomb decided to shift focus away from production and towards focusing strictly on education. They closed the Newcomb Pottery enterprise in 1939.

The Newcomb Art Department industrialized other enterprises as well. Besides the Pottery, there was also an Embroidery enterprise, a Metalworking enterprise, a Bookbinding enterprise and a Printmaking enterprise. Enterprise works were created for sale, which differentiates it from the artwork made by students at Newcomb as part of their education.

After Newcomb Pottery closed in 1939, the Newcomb Art Department started a new pottery enterprise, which they called the Newcomb Guild. Guild works, like Newcomb Pottery pieces, were to be built by hand and were to be inspired by the local landscape, but they were radically different from the Pottery’s ceramics in many ways. Guild ceramics emphasized function over decoration, and they were created in product lines where all pieces in a set looked similar. The Guild also stopped hiring graduates and employed a few members of the Art Department faculty, but creating a career path for women was no longer central to its mission.

Newcomb Guild ceramics were modern and abstract. While not overtly a representation of the local landscape, the vases were abstracted interpretations of the lichen and moss that grows in New Orleans, as well as reminiscent of water, with ribbed designs a reference to raindrops making ripples on the water, and also included a style representative of clouds. Guild pieces were not signed by their artists, and were instead, simply stamped with the Newcomb Cypher or sometimes labeled with a sticker that identifies their product title.

The Newcomb Guild, while arguably ahead of its time in applying modern design principles to its ceramic’s enterprise, was not financially a success. Newcomb College, which had shifted its focus to education, was not interested in marketing wares for sale and thus sold little. The Guild never officially closed, but stopped production in 1952 when its principle designer, Sadie Irvine, retired. 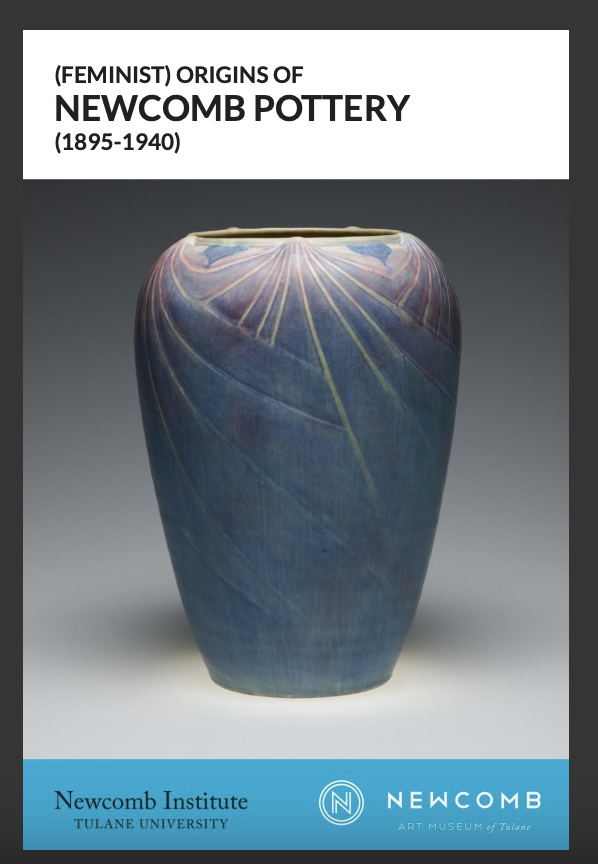 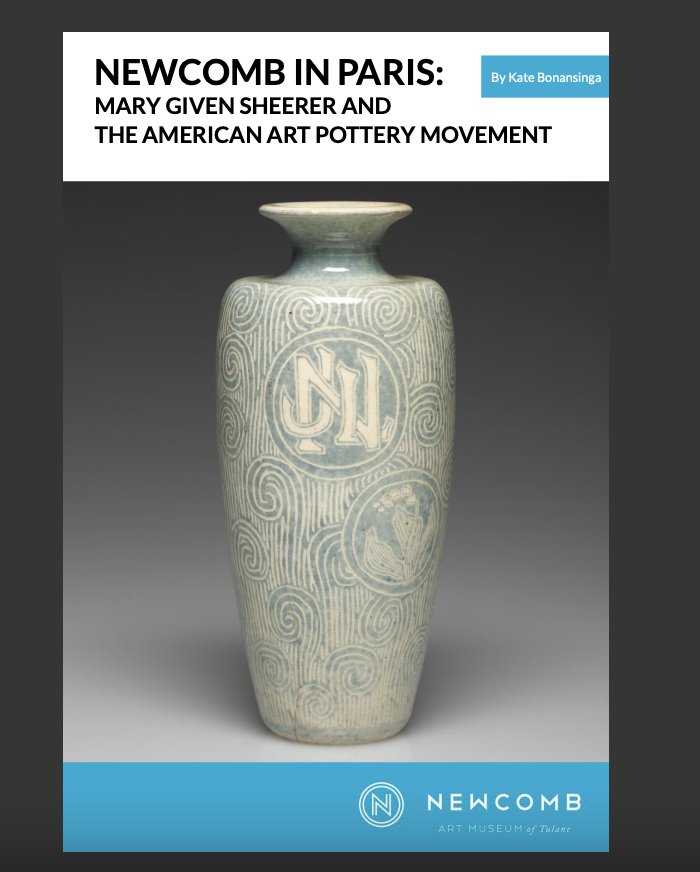 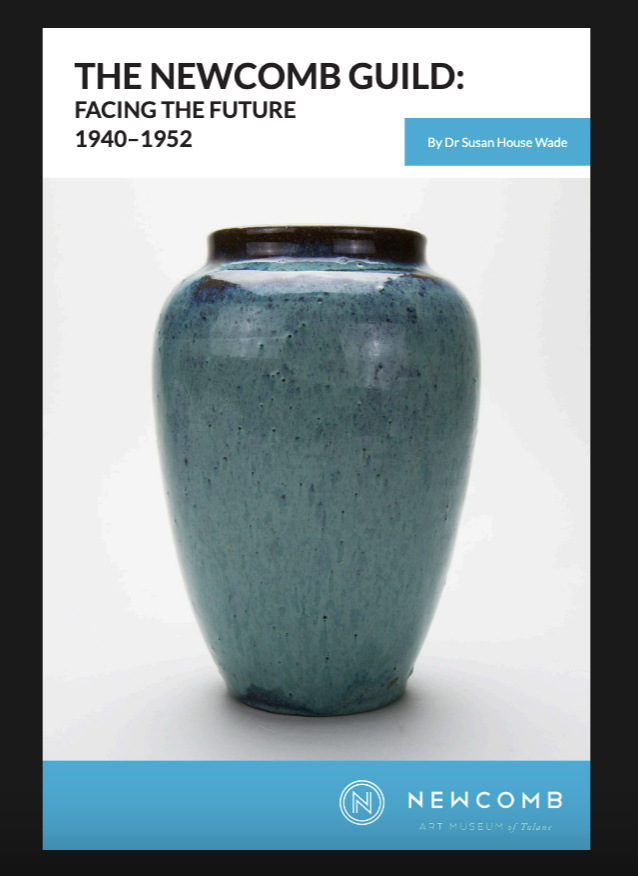 Newcomb Textiles
We use cookies to ensure that we give you the best experience on our website. If you continue to use this site we will assume that you are happy with it.Ok
Scroll to top